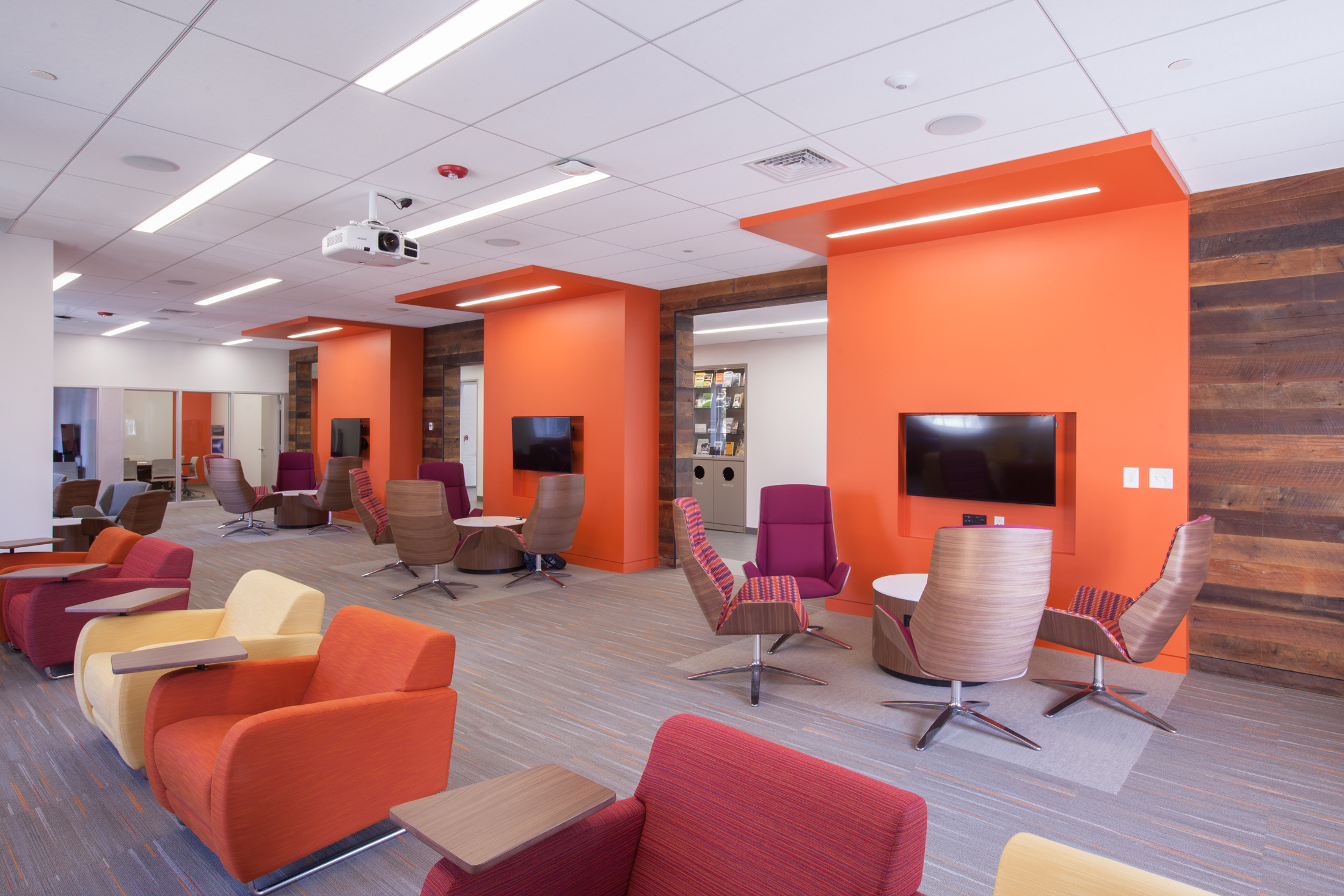 KINGSTON, R.I. – October 21, 2016 – The University of Rhode Island community had its first look today at the $6.5 million Harrington Hub for Global Leadership in Communication and Media as national media leaders, the state’s Congressional delegation and University officials held a ceremonial “film cutting” to open the facility.

Housed on the first floor of historic Ranger Hall, which was built in 1913, the Hub provides students and faculty with the latest editing and audio suites, film screening theater, state-of-the-art classrooms and technology. The Hub primarily serves the departments of the Harrington School of Communication and Media, which are communication studies, film/media, journalism, public relations, writing and rhetoric and library and information studies. Students from all majors, however, will take courses or work in these new spaces.

URI President David M. Dooley joined Richard J. Harrington, ‘73, Hon. ’02, chairman and general partner of Cue Ball, a venture capital firm, and former president and chief executive officer of the Thomson Reuters Corp., Senators Jack Reed and Sheldon Whitehouse and Congressmen James Langevin and other dignitaries in the “film cutting” to celebrate the grand opening. Harrington and his wife, Jean, donated $5 million to support the School and made an additional $130,000 donation to support the Hub. Executives from such companies as CBS, NBCUniversal, IBM and Thomson Reuters were also among the participants.

State, University and private money funded the project, which was designed by Durkee, Brown, Viveiros and Werenfels Architects, Providence. The contractor is E W Burman of Warwick.

“Our vision at URI is to be globally competitive and engaged,” said President David M. Dooley. “And thanks to the generosity, support and leadership of Dick Harrington and his wife, Jean, and other generous donors, we celebrate the opening of this facility today, which gives our students, faculty and staff the latest tools to enhance their learning, research and outreach to build on their already outstanding reputations as global leaders in this complex and ever-expanding communications environment. We now have the technology and learning spaces that make the Harrington School as strong as any program in communication and media studies.”

Harrington, a longtime and generous supporter of URI, offered congratulations to those involved in the project.

“I am so pleased and proud to be here today to see the exceptional progress the University has made to become globally competitive in communication and media education and research,” said Harrington. “I want to commend Dean Brownell, Professor Roth, the faculty, students, our board members and our generous donors for working so hard to make this vision a reality. I have confidence that when people around the nation talk about leading university communication programs, URI will be part of the conversation.”

Leticia Simone, a senior public relations major from East Greenwich who was born in Brazil, said the Harrington Hub will lead to many opportunities for students.

“People will step into it and see a whole world of possibility. They can borrow video cameras, use the screening room, and take advantage of the new active learning rooms,” she said. “The focus on globalization of communication will help students and faculty reach out to professionals and students across the nation and across the globe.”

As soon as visitors entered Ranger Hall for tours today, they saw a four-panel video screen showing a video by Christiane Amanpour congratulating the Harrington School on this great new facility. In the future, the screen will display the latest headlines from around the world, information and videos about the Harrington School, movies and news clips produced by Harrington students and faculty.

Among the key features of the facility are:

The living and learning room, an open space with movable furniture and three large-screen, high-definition television screens. Numerous computer plug-ins allow students to connect to the TVs. The commons also has a projection system for informal talks and lectures. Most of all, the area is a place for students to gather, socialize and work on projects.

Two collaborative editing suites adjoin the commons, enclosed in sound-proof glass and windows. Each suite is equipped with MacBook Pro computers, which are loaded with Adobe Creative Cloud software, and technology that allows for the transference of audio from one room to the next. Students can use the computers in the suites or can plug in their own. One suite honors Bill Achtmeyer, a member of the Harrington School Executive Advisory Board and founder and senior partner of Parthenon-EY, a Boston management consulting group.

Film screening theater, which has a four-panel white board that slides open to reveal a large screen for viewing movies and other videos. The theater accommodates 38 students and is equipped with a Sony laser projector and 7.1 Surround Sound. Sound-proofing panels in the walls and windows, and light-proof, motorized shades make it the perfect place to watch films and videos.

Digital innovation lab, featuring 22 iMac computers. This area provides students with the rigorous computer power and speed for large digital projects, capacity they might not have with their own computers. Professors are able to run demonstrations from a computer at the lectern, which can be shared simultaneously on each iMac, allowing students to interact in real-time with the lessons.

Recording/audio lab, which can “talk directly” to the editing and audio suites, with two-inch thick, sound-proof glass manufactured in Italy.
Flagship editing room, which is described as the quietest room on campus and offers top editing space as well. Described as the current industry standard, the suite has two large monitors, a reference monitor and a third large screen that allows work to continue on the main project while other screens are in use. The space is physically isolated from the rest of the building and contains the most advanced sound-proofing.

Richard and Jean Harrington Active Learning Lab, which contains four large circular tables and monitors. Each table is equipped with two computers so students can work in clusters. All of the furniture is on wheels and can be moved to suit the learning approach of the day. The instructor station is located at the center of the room to facilitate an active learning experience.

Linda Lotridge Levin Advising Center, named after the former professor of journalism and chair of the department, who over three decades prepared hundreds of students for awarding-winning journalism and media careers.

“This is a comprehensive communications hub for the 21st century, and I know our students and faculty are eager to get to work here,” said Winifred Brownell, dean of the College of Arts and Sciences, who played a critical role in bringing the Harrington School and Hub to fruition. “It is indeed a transformative step forward for a school that has produced a Pulitzer Prize winning reporter, world renowned broadcasters and global leaders in film, public relations, marketing and management.”

Adam Roth, associate professor of communication studies and interim director of the Harrington School, said the more than 300 people who participated in today’s event is a testament to the excitement generated by the opening of the Harrington Hub.

from The CW Prov – http://www.thecwprov.com/story/33359044/uri-harrington-hub-opening