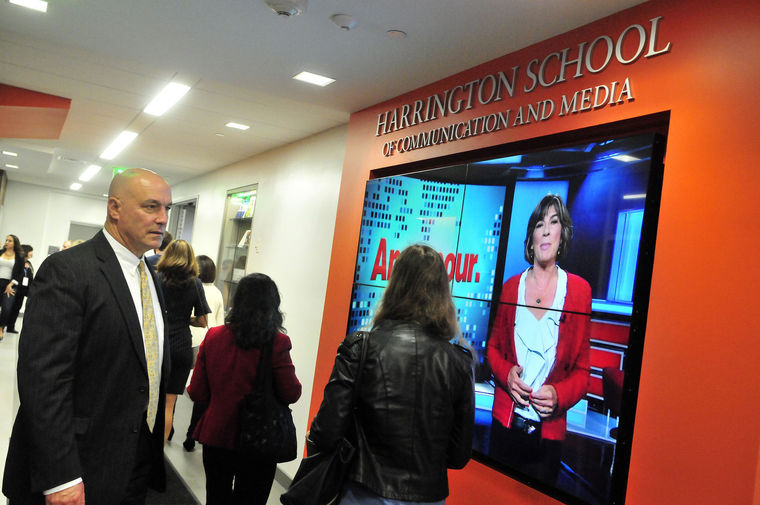 At a time when global communication skills have never been more important, the University of Rhode Island believes it has taken a huge first step in preparing its students for life outside the classroom.

A new $6.5 million first-floor renovation to one of the university’s oldest buildings is being touted by university officials as a “transformational step” to teaching with technology and preparing students for a 21st century global education in communication and media.

During a special ceremony celebrating the opening of the Harrington Hub building, URI President David M. Dooley welcomed a number of dignitaries, including Rhode Island’s congressional delegation, to the campus to discuss the global impact of communications and media in the 21st century.

Citing the presidential election, Dooley discussed the impact American and foreign news are having around the world.

“The whole globe lit up in seconds when [Donald Trump] refused to commit to honoring the outcome of the American presidential election,” he said. “The entire connected world is now in suspense.”

The Harrington Hub’s new home is in the remodeled first floor of Ranger Hall, which was built in 1913. The building is a mix of old and new with its original facade of large stones and large windows a reminder of the age of the institution. Inside, the building is adorned with large, flat screen TVs, common work spaces to encourage collaboration and state-of-the-art technology that keeps up with modern techniques of story telling.

Starting next semester, the first floor of Ranger Hall will fill with Harrington School’s 1,500 students from communication, film and media, journalism, public relations, writing and rhetoric and library and information studies.

“The ability to communicate across historical, cultural, language, socio economic and other barriers and divides has never been more critical to the future of America and the world,” Dooley said. “What we aim to do in the Harrington School is to produce the professionals that will guide and lead and contribute to new developments in the world of global communications.”

The renovation includes new editing and audio suites, a film screening theater and a few classrooms with new technology. Studio spaces are filled with Mac computers with editing software for film and audio projects surrounded by two-inch thick, sound-proof glass.

The majority of the funding, $5 million initially and an additional $130,000, came from Richard Harrington, with others in the media industry, advisory board and faculty members who also contributed.

Construction began a year ago for the first floor facility, but ideas for the Harrington Hub started in 2009. Winnie Brownell, URI’s Dean of the College of Arts and Sciences, said there were delays in the construction of the building and labor and material costs went up as a result.

“The work for the upper floors will be incorporated in a general obligation bond, which will involve all historic renovations of buildings in the historic quad that haven’t been touched,” she said, adding that there is no specific timeline nor price tag for when the bond would show up on a ballot.

Adam Roth, interim director of the Harrington School, said the second phase of the Ranger Hall reconstruction would include more classrooms and offices.

Special guest Meredith Vieira, a journalist and talk show host known for her time on television programs like “The View” and the “Today” show, said while technology is an embedded part of journalism today, students still have to learn the basic foundations of the industry as those who came before them before the social media boom.

“The facility is state-of-the-art, which is important, but I really believe that at the end of the day in communications or my particular field of journalism, the most important skill you can learn is the skill of writing,” she said. “So many students are ill-prepared. Learn how to listen and have empathy. The [technology] is the mechanics of it, and can always be learned.”

Kate Dery, a public relations and communications major, said the active learning classrooms, which have several large circular tables where students can project their computer screens to facilitate group work, are a noticeable improvement for students.

“This facility is so much more in depth and high tech than what we’ve been used to,” she said. “In the public relations and communications classes we do a lot of group work so this is a great dynamic for that kind of work.”

“I look forward to the Harrington School helping to lead us through social change so that the communications diet of the average American is healthy, informative and supports our country’s progress,” Whitehouse said.